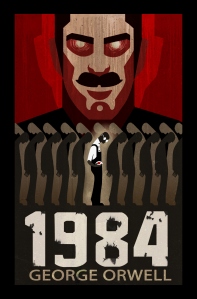 Past. Present. These are the things that we know to be true. These come to define our reasoning, decisions, memories, and hopes. But what if one day you were told that everything you knew was a lie and the facet of truth reverses itself. A new set of decisions, memories and hopes are handed over to you. Nothing has changed. The past is past even now, the present continues and the future is still as uncertain as ever. Nothing has changed, except your truth.

‘Who controls the past controls the future. Who controls the present controls the past.’ Such is the travesty of our certainty in George Orwell’s imagery of a dystopian futuristic society in 1984. In this plausible world, where every aspect of your being is controlled by the government, each person is a sheer prototype of how an individual is expected to be. As the book follows the trail of Winston, an outer party worker whose job is to alter the past, it is revealed that the entire population not only accepts the truth of their reality but rather revels in it. That, to me, is the most frightening alternative route that our society can decide to tread on. Not living in front of ‘telescreens’, not being ‘evaporated’ but not questioning our everyday actuality, accepting it as is.

It scares me to think that we accept Gandhi as a Mahatma as easily as others term him a sexual maniac or how sometimes Modi is a monster responsible for cold blooded murder and at other times a forbearer of our ‘acche din’. Opinions shouldn’t be based upon the convenient truth or be chosen from a menu. We can either train ourselves to shut out every thought that originates in our minds and turn them to pre-dictated pointers, or be ignited by our  surroundings. While the ‘thoughtcrime’ in 1984 was keeping your indigenous thoughts alive that did not comply with the party’s motifs, its equivalent today would be to have none at all. Every time I choose to accept the truth that is simply put forward to me on a platter without scratching my brains, I commit a thoughtcrime. Imagine turning into a society that does as it is told and follows what is followed. If we were to become such, there would be no ‘I’. There would be no thoughts of our own and no desires in our heart. Or rather, no thoughts that haven’t been dictated to us and no desires that we aren’t programmed to have.

‘I’ would cease to exist.